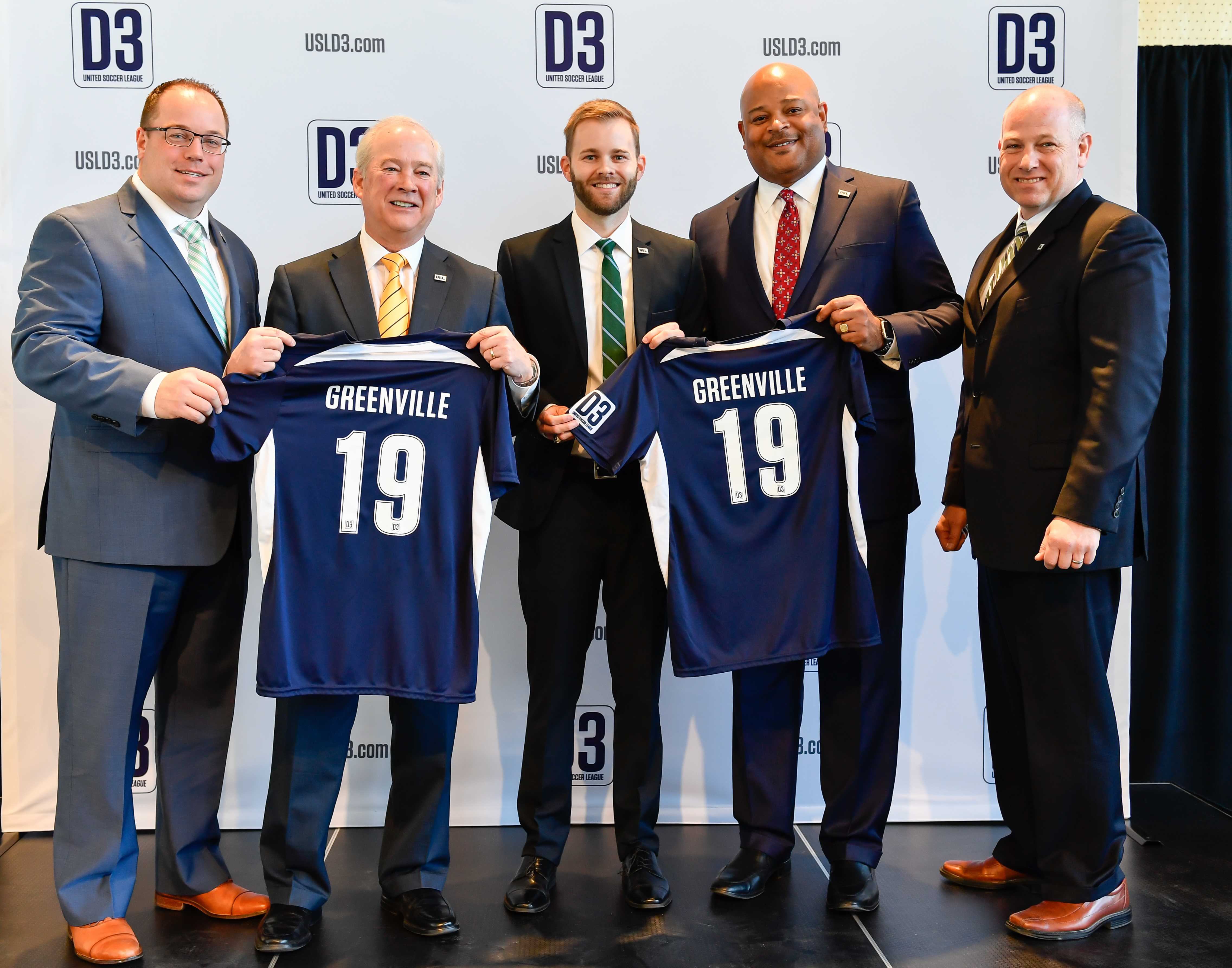 The Greenville community has acquired a United Soccer League (USL) Division III franchise and will bring professional soccer to the Upstate for the league’s inaugural season in 2019, the league announced on Tuesday, March 13.

“We are honored to have Greenville, South Carolina, as a founding member of USL Division III, as the team provides the more than 1.4 million people in the Upstate region with a professional team to call their own,” USL CEO Alec Papadakis said. “Greenville is an incredible addition to USL Division III alongside South Georgia Tormenta FC and FC Tucson as founding members, and we have no doubt the ownership group led by Joe Erwin will develop a successful and passionate team for our growing Southeast contingent as we aim to develop regional rivalries across the United States.”

The ownership group is committed to creating a first-class soccer stadium by building or renovating an existing site and is scouting temporary locations to play its first season, which kicks off in March 2019. The season will consist of about 14 home matches and several exhibition matches and will run to mid-September. Announcement of a permanent site is expected to follow later this year, along with the team’s name, colors and logo.

“We are thrilled to be a part of the USL’s new Division III league and to bring professional soccer to our community,” Joe Erwin said. “The Upstate has a passion for the sport that extends from community soccer clubs that attract thousands of youth to high school teams that compete at the highest levels and nationally-ranked programs at Clemson University and Furman University.”

The USL – one of the most respected Division II soccer leagues in North America – announced the launch of a Division III league to bring a proven, professional soccer experience to new cities across the country. The league anticipates launching in 8-12 markets for its inaugural 2019 season and has already announced teams in Statesboro, Georgia, and Tucson, Arizona. USL officials have visited cities across the Carolinas and the Southeast, as well as the Midwest and Northeast. More team announcements are expected in the weeks ahead.

“This is a huge win for Greenville and the entire Upstate,” added Carlos Phillips, President of the Greenville Chamber who was in Louisville, Kentucky, when the USL launched a team there. “I have seen firsthand the impact professional soccer can have on a community – in terms of economic development, company recruitment and attracting and retaining young professionals.”

Doug Erwin said he and the others on the Erwin Creates team understand the importance of professional leadership and recruited Lewis, who previously served as team president of the Greenville Swamp Rabbits, an ECHL affiliate of the New York Rangers.

“Our success strongly depends on having the proven leadership of someone who understands professional sports, the market and, most significantly, is an active member of our community,” Doug Erwin said. “We found that in Chris, and we’ve placed him at the top of the pyramid running this company.”

“I am humbled to be selected to be a part of this group and the effort to launch a professional soccer team in the Upstate,” said Lewis. “My family and I have grown to love this area and truly appreciate the incredible quality of life it provides. With both of our children playing academy soccer for two of the prominent clubs in the area, the sport has become an everyday part of our lives that we truly enjoy."

"I am proud and excited to be the steward of this effort and will make sure that this organization is a civic-minded asset to the Upstate that further enhances the tremendous quality of life offered by this community while also providing a top-notch family entertainment experience,” he said.

About the United Soccer League

The USL is one of the most prominent Division II professional soccer leagues in the world, reaching a population of more than 75 million people to fuel the growth of professional soccer across North America. Headquartered in Tampa, Florida, the USL provides unparalleled club support with a growing team of more than 50 professionals across 17 departments, ranging from operations to marketing, communications and sponsorship.

The USL has national media partnerships with ESPN and SiriusXM, and operates USL Productions, which includes a state-of-the-art facility that will produce and distribute more than 500 league matches and more than 1,000 hours of original content to national partners, local affiliates, the USL’s Match Center and international markets over the 2018 season.

USL Division III is shaping the future of the game in the United States, uniting passionate fans in new markets with the thrill of a proven professional soccer experience. Beginning play in 2019, USL Division III has announced South Georgia Tormenta FC, FC Tucson and a Greenville-based team as founding members and will have additional franchise announcements in the coming weeks and months. Official competition structure and brand launch announcements are also expected later this year.

Erwin Creates was established in 2016 by Joe Erwin, co-founder and former president of national marketing agency Erwin Penland. It serves as the platform to support Erwin’s continued entrepreneurial involvement in business consulting, venture creation, education, training and civic activities, including his commitment to growing The Erwin Center for Brand Communications at Clemson University. In spring 2016, Erwin Creates opened Endeavor, a creative, collaborative community which offers co-working space and business-building opportunities for creative services professionals—and serves as a destination for companies and individuals looking to connect with and help cultivate the Upstate’s vibrant creative class.