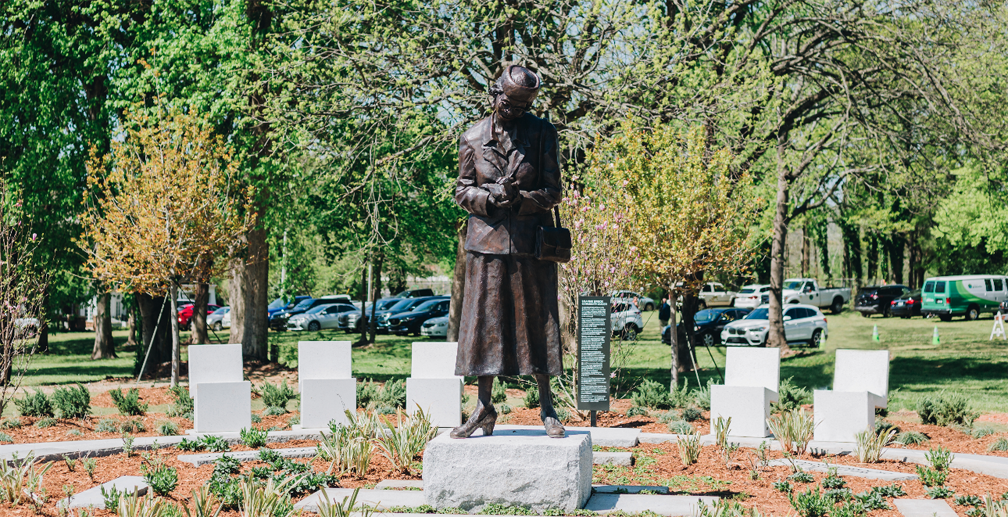 A revered and beloved figure in the Southernside neighborhood, Brock began feeding the hungry from her own kitchen and dedicated her life to fighting poverty, crime, and neglect in her community.

Born in 1915, she wanted to serve as a true missionary but concluded the need was just as great on the streets of her own neighborhood as it was in other parts of the world.

The Lila Mae Brock Plaza at the corner of West Washington and South Hudson streets includes a flower garden, seating and a statue that the City of Greenville commissioned from local artist Charles Pate Jr.

The Lila Mae Brock Plaza is made possible in part by contributions from the William Randolph Hearst Foundation, ScanSource, Verizon, William R. and Dr. Karen Brown, Bank of America, and Fluor Corporation.

After retiring as a cafeteria worker for Greenville County Schools in the 1970s, Brock founded the Southernside Community Center in 1980.

Working with others, she encouraged churches and organizations to feed and clothe the “street people.” With much support, organizations opened their facilities to provide clothing and offer free medical services, places to bathe, and employment for those who could work.

In the 1980s, she provided space for new Hispanic residents to learn to read English then worked with the city to help low-income residents become homeowners and receive job training, employment, and daycare.

She and her son-in-law, Rev. J.M. Flemming, sought Department of Housing and Urban Development funds to build 68 apartments for the elderly and disabled in Southernside. The Brockwood Senior Housing complex is named in her honor.

Recipient of the Order of the Palmetto in 1990, the state’s highest civilian honor, and the WYFF Jefferson Award, Brock passed away in February 1996.